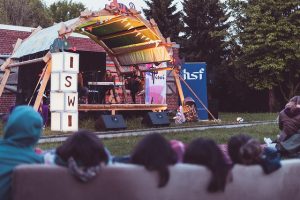 A Vietnamese student stands – somewhat perplexed – in a train station in front of a flashing control gate. The man in the white suit in front of her gives her loud instructions: “Walk slowly! No, no. Start again. Now turn around. Stop!” A cluster of people forms around her, growing steadily. Half amused, half astonished glances follow the girl running backwards through the gate. The man in the white suit looks scrutinizing at her. If this was a real station, our student would have a problem now. But, dear readers, we are in “Time Travel Station”. May I introduce: the craziest cultural project of this year’s ISWI 2019! It took almost a year for the cultural team to realize this event for the International Student Week in Ilmenau. Then it finally happened, the entire foyer of the Humboldt Building of the Technical University was transformed into a time travel station within a few hours. Long grey cloths stretched over the heads and formed a majestic hall ceiling, while two time travelers bent over a small yellow ticket counter. Behind them a remarkable queue had already formed, through which a thief in brown regs scurried. Incomprehensible announcements from crackling loudspeakers and wandering Martians shooting interviews for their own TV show completed the picture. Anyone who got a ticket here or boarded an express train was either led to a closed workshop by a costumed person or could walk from stand to stand in front of the station. In keeping with this year’s theme of tradition and transition, in these hands-on workshops yesterday’s craftsmanship and today’s technology were contrasted and made experienceable for the visitors.

Ilmenau, which had just woken up from its hibernation, also experienced a change when the first participants arrived at the Ilmenau railway station (this time not a fictitious one) on Friday, 17th May. After our altogether 336 international guests were successfully accommodated at so-called “hosts” (mostly students and city inhabitants who provided a place to sleep and a small breakfast), they began their week on Saturday with a full programme. Warmed up by the sports festival, our participants met their respective “Groupleaders” for the first time. In the evening, the 14th International Student Week was officially preluded with the opening event and the Welcome Party. But this week was not just about parties. In four days of “Groupwork” on various topics such as philosophy, human rights and the environment, all the participants had the opportunity to discuss the theme “Changes and Choices: Good by(e) tradition?” and had the chance to overcome mutual prejudices, exchange proposals, discuss solutions to problems and develop new ideas together. In addition to lectures on environmental conservation and right-wing populism, a panel discussion on migration and the two film screenings of “The Cleaners” and “Female Pleasure”, the opening lecture by the Norwegian peace activist Dr. Steinar Bryn, who accompanies peace projects in the Balkans and around the world, and whose critical discussion on the subject of “dialogue” also encouraged our international guests to think and debate, provided inspiration.

Apart from the content-related programme: How can people of different backgrounds be encouraged to exchange ideas? Of course, through music, food and dancing!  Exactly these conditions were given at the World Food Festival on Sunday, 19th May. Despite the grumpy weather, which even troubled the die-hard people accustomed to Ilmenau weather, the atmosphere in the ice rink was exuberant. From Philippine chocolate to Bulgarian pastries, you could taste the various flavours of the world, stroll back and forth between the tables and admire the colourful robes of the culinary experts. The small dance floor was almost overrun by song performances, traditional dances and the laughing and bouncing crowd.

The cultural highlight, however, was the Open Air Concert on Wednesday, 21st May, which almost filled the ice rink once again. The dancing crowd could move under the colorful circling lights to rhythms and melodies of the Thuringian band Skavida and the Reggae Queen Sista Awa and their crew. The crowning finale was played by the German-Brazilian music group Emersound, who – with their colourful mix of hip hop and Latin American sounds – released our viewers into the night with tired feet but smiling faces. Finally, the next day waited with the exciting possibilities of the Share Space. It was a day in which the visitors themselves could offer lectures or workshops on any topic. There were no limits. The only rule was to use the time, trust yourself, and use your feet as soon as you don’t learn anything to go to another workshop. Thus, in addition to discussions about education and women’s rights, a meditation and relaxation course was created.

The participants laughed, talked, danced and suddenly, sooner than expected, the day of the presentations and the closing ceremony had arrived. The programme was as varied as the group members: music, dance, theatre, short films and passioned speeches were presented.

And there it was: the ISWI feeling. Because it no longer mattered that the participants had 77 different nationalities. In the Audimax there were no national borders in the way at that moment. Everyone laughed and listened as a part of this world that they wanted to change. Even though there were different views on the motto, in the 10 days, the participants realised that different traditions and opinions did not hinder mutual friendship. And perhaps they will not only take back their suitcases, but also carry a little bit of change out into the world.